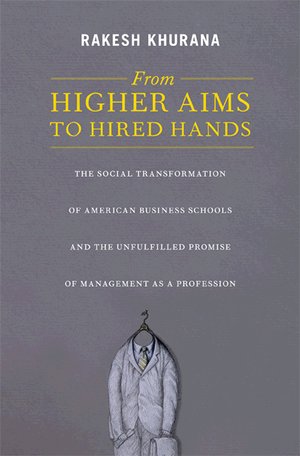 During a first phase which lasted throughout the 90s the critiques to the management passed by (or even better, slipped by) without shaking up or altering the discourse of its powerful gurus. Its was like an intermittent idea that appear and vanish.

But this appearance of “there is nothing wrong here” could not avoid these concerns from advancing underground until it broke out in other authors, also anxious and brave. Thus in 1997 Alvin and Heidi Toffler (1997) comes back to the critique of Ormerod to the classic paradigm proclaiming that “on the basis of linearity and equilibrium assumptions, and highly quantified, the dominant paradigm in business management ran parallel to the mechanistic assumptions of western economics which, in turn, tried to limit Newton’s physics”.

Two years later, in 1999, Locke, Doc Searls, David Weinberger in The Cluetrain Manifesto- www.cluetrain.com- brings a conception of markets as conversational networks, and they berate the loss of real human dialogue between companies and their audience and they sting them into recovering it.

But it would be the 2002 Nobel prize winner, Daniel Kahneman who would moulder the keystone of the classic paradigm by making the weakness of the economic rationality assumption apparent and revealing this and the remaining anthropological assumptions of the economic theory do not correspond with empirical results (Ovejero 2005). What is ultimately being condemned is the dehumanised way with which Management conceives its own operators replaced by simplifying beings (“homo oeconomicus”, “rational being”, “player”, etc.) which in theory behave according to a “rational principle” which does not correspond with the real behaviour of real people. To these critiques we would have to add a wide trend of thought that advocates a recovery of the collateral (Del Bono, 1994) and intuitive (Malcolm Gladwell, 2000, 2005) strands of thought; of transdisciplinarity (Vilar, 1997) and of cultural factor and holistics (Constantin von Barloewen, 2003).

In 2005 Sumantra Ghoshal, professor in the London Business School said “in the desire to create and protect the pretence of knowledge-in our venture to make business studies a science-we may have gone too far in ignoring the consequences not only for our students but also for society” (…) “this all resulting in unrealistic assumptions and invalid prescriptions”.

But it would be Rakesh Khurana (2007), professor in Harvard Business School, who in a book with a long title published by Princeton University and selected by The Economist (8th-14th December, 2007) as one of the year’s best books: “From Higher Aims to Hired Hands: The Social Transformation of American Business Schools and the Unfulfilled Promise of Management as a Profession”, blames Management head-on for having lost its way. He criticises the current education system developed by business schools and, above all, the product that leaves them. According to Khurana for some time business schools do not represent the idea with which these schools came into being: making business management a profession comparable in prestige and academic rigour as those of law or medicine. These centres have moved from trying to train students “with certain formal or informal codes of conduct, and, even more fundamental, to an ideal of service” to creating managers whose exclusive concern is to gain benefits for shareholders. According to Khurana himself:
“In the course of this history, the logic of professionalism that underlay the university-based business school in its formative phase was replaced first by a managerialist logic that emphasized professional knowledge rather than professional ideals, and ultimately by a market logic that, taken to its conclusion, subverts the logic of professionalism altogether.(…) “From this historical perspective, business schools have evolved over the century and a quarter of their existence into their own intellectual and institutional antithesis”

In this context, postgraduate executive education has become, according to Khurana, in a business in which the schools sell a product, MBAs, and students are only consumers. And like in any market, there are “brands” that are liked and succeed more than others, many companies have already shown their disillusion with the students that graduate from these business schools due to the scarce development of their interpersonal capacities. The most generalised complaint among the recruiters is that they receive well-trained candidates in everything regarding numbers (accounting, finance, auditing, balance sheets…) but with scarce relational capacities of communication and leadership. In other words, they do not have sufficient executive skills. This has led Leadership Development Programmes to proliferate, in addition to the introduction of other elements such as coaching and boosting personal mentorship in MBAs. Khurana ends by suggesting that Business Schools attempt rebalance their relationships with students, faculty, business and society. In the end, it is about returning to the past, as professor Khurana points out, to recover the essence of what a good manager should be: not only a great expert, but also a person with the capacity to lead a company and at the same time contribute to improving its environment.

These are not empty critiques: the recent business scandals of WorldCom, Enron, Parmalat, toxic assets, etc. are demanding a recovery of business ethics as part of a long term business efficiency model. In this context, authors such as the abovementioned Sumantra Ghosal (2005) blame the current and dehumanised Strategic Management theories for portraying an amoral view of business and a clear lack of responsibility: “Business schools do not need to do a great deal more to prevent future Enron; they need only to stop doing a lot they currently do. They do not need to create new courses; they need to stop teaching some old ones.”

Meanwhile, most Management devotees justify the current state of things and defend themselves like lions pinned to the ground. The critical voices which used to be a minority have grown and rearmed themselves. They are no longer timid proposals on a possible change of paradigm; they are real cries pressing for a deep change. In this new context the most important fact is Gary Hamel´s return to his critiques positions of 1994 asking himself: “The End of Management?” in the title of the first chapter of his new book “The Future of Management” (2007)

So we reach to 2008 and the ground is already prepared for the surprising proposals of the Half Moon Bay group (next post).

Any cookies that may not be particularly necessary for the website to function and is used specifically to collect user personal data via analytics, ads, other embedded contents are termed as non-necessary cookies. It is mandatory to procure user consent prior to running these cookies on your website.