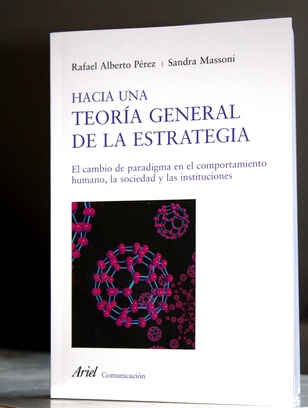 >TOWARDS A GENERAL THEORY OF STRATEGY

It seems that the future of Strategy has not been a priority in the experts’ agenda, with the exception of a few authors, very few, that address the question and of some congresses and seminars. To begin with, it is surprising that the strongest and most significant trend that is working on the weak points of current Strategy is Latin and not Saxon (when Strategy has been developed basically in the Saxon world for the last 50 years).

We are referring to the Foro Iberoamericano Sobre Estrategias de Comunicación (Ibero-American Forum On Communication Strategies) FISEC. Throughout the debates of its seven International Meetings (the VIII Meeting will take place in Cádiz, España) in which around 300 experts, professors from 120 universities, journalists and senior executives from many Institutions and companies from 22 countries, FISEC has gone from critiques to proposing solutions. An evolution that we can follow in the 155 articles published in its online Academic Review www.fisec-estrategias.com.ar indexed in LATINDEX. Their proposal is called the New Strategic Theory (NST) and is specified in 7 changes with regards to the conventional formulations and the current praxis in matters of Strategy. 7 changes that we will try to summarise below, and that the interested reader can find developed in the book “Toward a General Theory of Strategy” (Rafael Alberto Pérez, Sandra Massoni, Ariel, 2009).

>THE 7 CHANGES PROPOSED BY FISEC

-1st Change: the central paradigm. From fragmentation to complexity.

FISEC maintains that the cause of failure of many of our strategies lies in the inadequacy of our mind maps. The explanation is simple: all strategies aspire to transforming reality (physical and social) but this reality is not as objective or as external as we thought, but it is reconstructed in our mind and conditioned by the visions of the world that provides us with the theories, models and paradigms in which we have been educated. So if we want to get closer to the object of our transformation we need to review and update these visions and paradigms.

Well, today we know that reality is complex, multidimensional, fluid and sometimes chaotic, but the fact is that most strategic operators think (and think their strategies over) in a dual, fragmentary, unidimensional, static, casual and linear manner, linked to what is quantitative (money, business, success, market share, etc.) and, what is more serious, in confrontative and antagonistic terms. In fact, it seems that society is claiming quite the opposite. The problem is that our leaders have been educated in the old Cartesian-Newtonian paradigm and they lack the practice to act in the new scenario. They are working on the wrong maps made for other purposes, which causes them, most of the time, not to have a map of the territory or to have a transformation process model which they are specifically facing.

Other disciplines have adjusted to the new paradigms and have kept up to date. Strategy still has not done so. FISEC claims this change for it believes that it is a necessary step prior to building a new theory of Strategy that is more appropriate for the new contexts. Quoting Jesús Martín-Barbero, the mission of FISEC is to study together if from our “work as cartographers” we can trace better maps.

FISEC suggests we think of reality as a series of fluid, complex and (sometimes) chaotic processes. For FISEC the field of intervention of all Strategy is that and no other.

-2nd Change: in the subject. From the rational player to the relational man

We have been living a long process in which the different disciplines have been replacing man with its components. Strategy, which is being taught in Business Schools and disseminated through a certain successful literature, is not foreign to that trend and has also, excluded the human being, replacing it with reductionist categories and constructs (homo oeconomicus, rational player, player, consumer, customer, target group, elector, etc.). And it is designed on the assumption that these entities operate with an agency germane to a real subject, but provided with a rationality that does not appear in real life. Far from these conventional formulations, FISEC maintains that the human being is the necessary cornerstone for strategic models and explanations to land, be embodied and become more useful. It is the missing link of strategic theory.

To the question of what human being are we talking about, FISEC has prepared an answer: that which transmits science to us at all times. And the truth is that the findings of neurocognitive sciences, genetics and cultural anthropology, among other disciplines, hardly leave the so-called rational decision theory standing.

The sheer fact of recognising that strategies are taken by real human beings-and as such these relational subjects with their reasons and emotions, but also with their incoherencies and contradictions- and not by artificial entities, and that it is also human beings (and not mere numbers and statistics) that may benefit from these strategies-or suffer from them themselves- substantially modifies the explanation of Strategy with which we have been working. This recovery of what is human, represents one of the key aspects in the New Strategic Theory proposed by the FISEC.

If FISEC’s theses prosper, the “economic man” will be facing a strong competitor: “the human man”. Mintzberg and Quinn are not alien to this idea when they say, “One of our main goals is to integrate a variety of views, rather than allow strategy to be fragmented into just “human issues” and “economic issues”. And it is not incidental that some Management experts have wanted to rectify by resorting to a bi-disciplinary view such as that called neuro-economics, which complements the notable shortages of Economics to address strategic processes with new contributions from Neurocognitive Sciences. An effort which we praise but which we believe is insufficient. We either assume the multidimensionality of Strategy or we do not. And if we assume it, why stay halfway instead of searching for a truly transdisciplinary view?

Against a Strategy that has excluded the human being by replacing it with reductionist constructs, the FISEC advocates its reinstatement in a discipline from which it should have never been absent. It is about seeing ourselves and the others as rational, open, dynamic and complex beings embedded in one or several social plots in which we take part (sometime strategically) by transforming them and at the same time by transforming ourselves.

– 3rd Change: in the organisation. From production unit to an innovative and significant nodule.

The organisation is the great collective subject of Strategy. Men associate to achieve certain goals that they would barely attain individually. The aspiration of organisations to be efficient and to perpetuate through time makes them assume mid/long term objectives, and to achieve them they tend to adopt strategies that mark the way to all of its members and facilitate the attainment of such goals. All this gives them a special importance as strategic actors. In fact, a large percentage of literature on Strategy implicitly or explicitly refers to organisations.

But in the mid seventies the idea that studies on organisations had had a “false basis” began to set, and that the inherited simplifying and ultra-rationalist plans were clearly unsatisfactory. And if in the last few decades new theoretic approaches have emerged, this has not prevented that, still today, many assumptions of the old organisational paradigm (among them, economic and work rationality, the organisation itself understood as a hierarchic and centralised governance structure, teleologic pragmatism, a functionalism that only thinks in terms of efficiency, etc.) keep enlightening many of our professional and executives’ eagerness. They no longer talk about chronometers, true, but in their conversations the old mechanistic metaphors are still recurrent, such as in the case of business engineering and re-engineering. Which makes the organisations’ replies to crises not being the result of revisionist readjustments so as to not fall into errors of the past, but they simply resort to a downsizing plan and… to lay off. Oh! I forgot, that’s what they call “re-engineering”.

Before this situation, FISEC asked “what should we change?”. And their reply was assertive, we have to work with a new conception of organisation: systemic, integrated, co-evolutionist, innovative, connective, significant and socially responsible.
It is not about an ideal organisation, but one that is possible. However, it does require a new way of administration.

Let us see this with a current example: the much acclaimed “innovation”. For FISEC it is very important that we understand that innovation is not something we can ask for and obtain on ordering it: two plates of innovation on table six!. All innovation is the fruit of non linear processes and of those incredible connections that Poincaré spoke of in its day. Innovation emerges-like Blas Lara brings to our attention- when circumstances are appropriate. Once this is understood, executives only need to create the conditions for this emergency to be produced.

But how do we know what the appropriate circumstances are? FISEC tells us that in order to achieve a new order we first have to generate certain disorder (it is “the order from noise” of Heinz Von Foerster and the “ordered chaos” or “chaords” of Dee Hock, the founder of VISA) and also a high degree of “connectivity”. If this is so and we think that yes, the new executive task will no longer be “to order” (impose order) but to (a) know how to manage spaces of “relative instability” and (b) encourage what Pierre Laffitte, the father of technology parks, named “cross-fertilisation” and Derrick de Kerckhoven as “connective intelligence”.

The question is now, how can we interconnect the contributions of the different individuals that work in the organisation and incite synergies between them? FISEC also has an answer to that: by encouraging communication. Making communication have a constituent role and not a mere instrumental one in the organisation (like it is today in the best of cases). Also constituent of the relationships with its external audiences. It is all about generating shared spaces of stable bonds and sense. All of this in a world that flows (hence the importance of applying the co-evolution principles). In this context, establishing how to improve the connectivity pattern and generating the appropriate significance, becomes the strategy that should guide an organisation. For this, each company will have to define the specific connectivity and significance it wants to adopt as a differential factor of its identity.

In this and in other matters, FISEC does not want to be original, that is not its objective, but to find a propose solutions. And for this, they pay credit to Greenfield, to Luhmann and to all who have levelled the way. In times of uncertainty it is important to be clear on which course is to be proceeded and to keep to it.
FISEC’s proposal is to see organisations as complex systems that co-evolve. It is all about looking at their interconnections, their flows and their networks to maximise them and generate the adequate significance. From this new perspective we will be able to design strategies that encourage innovation and social well-being.

Any cookies that may not be particularly necessary for the website to function and is used specifically to collect user personal data via analytics, ads, other embedded contents are termed as non-necessary cookies. It is mandatory to procure user consent prior to running these cookies on your website.